Across the room there were broad smiles, and for good reason. An important journey was coming to an end for 56 students of Bakersfield’s South High School.

Since its 1997 founding, Aera Energy has backed South High’s prestigious MS3 program, designed to give students a broad exposure to science, technology, engineering and math opportunities, while pairing them with Aera employee mentors. The program has continually produced some of the school’s finest graduates, and the class of 2018 was no exception.

Of the 56 students in the program, 40 said they will pursue a STEM path in their college career, and considering many of their college choices they were headed in the right direction with 20 students being accepted to University of California campuses, including six who were accepted at UCLA.

Part of that success is related to the mentoring students receive from Aera employees. 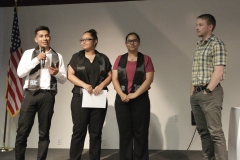 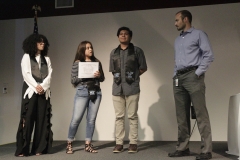 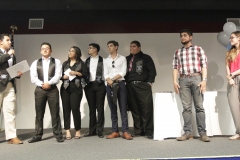 “For the students (the mentoring) is a key part of the engineering academy,” said Stacey Fuentes, a South High mathematics teacher, who coordinates the program. “The Academy is very much a holistic approach to education and the mentors provide a piece where the students get to work very closely, over a long period of time, with highly successful, high achieving adult role models.

“Many of our students come from impoverished backgrounds, and while their parents are extremely supportive of their education they don’t always know the pathways to get their children into college, and careers.”

As part of the program four students were given scholarships and four were given internships – a major prize among those graduating from the program.

“Aera is really opening a door for me,” said graduating senior Noe Garcia, who will intern with Aera’s IT department this summer and attend UCLA in the fall.

And the work with the students has been just as rewarding for Aera’s mentors.

“I would guess that I have mentored around 100 students from their sophomore year through their senior year with the goal of attending the best and most appropriate college for their career aspirations,’’ said Aera’s Dave Miner, who helped start the mentoring part of the program more than a decade ago. “I think the program has significantly increased the likelihood that these 100 South High students will attend college.”

The graduates of the program were:

Do NOT follow this link or you will be banned from the site!
We use cookies on this site to enhance your user experience. By clicking OK you are giving your consent for us to set cookies.OkView our Privacy Policy